Whether you're gearing up for a backcountry trek, preparing for the worst that nature or man can offer, or just want to have a great resource at your fingertips, you need this comprehensive, full-color new edition of the U.S. Army Survival Manual, thoroughly revised by Colonel Peter T. Underwood, USMC (Ret.). Ideal for military personnel, outdoors enthusiasts, and anyone who wants to be ready for anything, this is a thorough road map for all areas of wilderness survival, including:

From basic first aid to in-depth, step-by-step instructions on overcoming major obstacles and handling emergencies, this guide clarifies all aspects of survival using tactics derived from those whose lives depend on it.

United States Army Field Manuals are published by the United States Army's Army Publishing Directorate. As of 27 July 2007, some 542 field manuals were in use.[1] They contain detailed information and how-tos for procedures important to soldiers serving in the field. Starting in 2010, the US Army began review and revision of all of its doctrinal publications, under the initiative 'Doctrine 2015'. Since then, the most important doctrine have been published in Army Doctrine Publications (ADP) and Army Doctrine Reference Publications (ADRP), replacing the former key Field Manuals. Army Techniques Publications (ATP), Army Training Circulars (TC), and Army Technical Manuals (TM) round out the new suite of doctrinal publications. Not all FMs are being rescinded; 50 select Field Manuals will continue to be published, periodically reviewed and revised. They are usually available to the public at low cost or free electronically. Many websites have begun collecting PDF versions of Army Field Manuals, Technical Manuals and Weapon Manuals.

Numerous field manuals are in the public domain.[2] Especially for people training survival skills (e.g., survivalists, adventurous travelers, victims of natural disasters) the US Field Manuals may be a valuable resource.

According to The New York Times (14 August 2009), the Army has started to 'wikify' certain field manuals – allowing any authorized user to update the manuals.[3] This process, specifically using the MediaWiki arm of the military's professional networking application, milSuite, was recognized by the White House as an Open Government Initiative in 2010.[4] 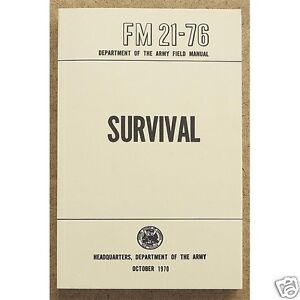