OCTA-CAPTURE is the embodiment of Roland’s commitment to excellence in music production. Designed to capture audio at a level of quality that will satisfy even the most demanding professionals, OCTA-CAPTURE features VS Preamps on its eight analog inputs. The following article will guide through installing the OCTA-CAPTURE driver for a Windows 10 computer. Notes: The computer automatically downloads the Windows 10 driver from the Internet when connected to the computer-so there's no need to manually download the driver.

The Roland Studio Capture offers a very generous amount of analogue I/O and an unusually high level of digital control.

When Firewire established itself as the de facto standard for multi-channel audio interfaces a few years ago, there was a strong tendency towards uniformity in the products that rival manufacturers developed — perhaps because most of them were using the same handful of different chip sets. I've lost count of the number of Firewire interfaces I've used that have eight mic inputs, eight or 10 line outputs, and a bank or two of ADAT digital channels for expansion.

These days, more manufacturers are moving to USB2 as a connection protocol, and it's striking how much more diverse the resulting products have become. Although there are a few that adhere to the established eight-in/eight-out format, there are also plenty that don't conform. Roland are the latest manufacturer to break out of this particular mould with the new Studio Capture. Drawing on their popular Octa Capture which, as the name suggests, did offer eight analogue ins and outs, the Studio Capture packages 16 analogue inputs and eight outputs, along with S/PDIF and MIDI I/O, into a smart and compact box.

It's not only in matters of I/O count that Roland are innovating. Like the Octa Capture, the Studio Capture is almost entirely digitally controllable. Apart from the volume knobs that control the main monitor output and the two headphone outs, every parameter can be adjusted either from the front panel or from the attached computer, and stored and recalled for later use. These parameters include mic preamp gain, and thanks to its 'Auto-Sens' technology, the Studio Capture will even set gain levels for you if you ask it nicely.

The Studio Capture is two rack units high, but little more than 11 inches wide, although it comes with some very solid metal brackets that can be bolted onto the side if you want to rackmount it. From the point of view of its physical design, it's a truly lovely piece of engineering, which manages to pack not only a lot of I/O and a fair number of controls into its small case, but also incorporates very clear five-segment LED meters for all 16 inputs. It feels very solidly constructed, and I'd have no qualms about taking it out on location. The one down side of its compactness is that it uses an external DC power supply.

As you can see, things are pretty crowded at the back of the Studio Capture; in fact, there isn't even room for an IEC mains connector... The first four inputs, and the two headphone sockets, are mounted on the front panel, with the rest of the I/O to the rear. One feature I like is that the first pair of outputs are not only duplicated on jacks and XLRs, but have a front-panel Level control that works in the analogue domain. This can be defeated using a small slide switch on the rear panel if you're using an external monitor controller.

The Studio Capture is not a class-compliant device, so drivers and control-panel software need to be installed from a supplied CD-ROM. Any changes you make using the front-panel controls are reflected on-screen in the control-panel software, and vice versa, so you can move between the two with confidence. Naturally, the control panel offers a larger and more colourful overview of proceedings, but the Studio Capture's 128x64 front-panel LCD conveys a surprising amount of useful information and is generally very clear, despite its small size.

Below the meters, each of the 16 inputs has its own selection button with associated red LED. Once you select a channel, the front-panel display switches to show a horizontal meter and the mic gain for that channel, plus a tick box which specifies whether it is linked to its neighbour to form a stereo channel. A nice touch is that by pressing any two channels' buttons together, you can select and modify settings simultaneously for any contiguous block of channels.

The control-panel software, with more space available, always shows settings for multiple channels at once. It has two main views: Preamp, which is where you adjust input gain, phantom power, high-pass filter, polarity and compressor/gate settings for the first 12 inputs; and Monitor Mix, which, as the name suggests, is a mixer that allows you to balance the levels of the input and DAW return signals to set up low-latency cue mixes. The 12 main inputs have built-in mic preamps, and can accept either XLR or jack inputs on combi connectors. Phantom power is individually switchable per-channel, which is nice, and according to the specs, a total of 50mA can be supplied across all 12 preamps. Inputs 13-16 are dedicated line inputs on quarter-inch jacks; they don't appear within the Preamp window, but you can open a small floating window offering nominal +4dBu, -10dBV and -20dBV sensitivity settings. (Using the stereo S/PDIF digital input deprives you of analogue inputs 15/16.)

The Studio Capture's Control Panel software lets you configure its mic preamps and dynamics. The high-pass filter is implemented in the digital domain, which, as far as I can see, means that you might as well switch it off and use your recording software's EQ to do the same job. It would be more useful, albeit more expensive, to have analogue high-pass filters before the A-D converters, so that unwanted low-frequency energy doesn't rob you of your headroom.

The dynamics are also digital, and within the main window they present only threshold and ratio controls, although an optional floating window gives additional parameters such as attack and release times. Strangely, though, the dynamics can't be switched so that they operate only in the monitor path. In other words, if you switch on the compressor or gate, your signal will be recorded compressed or gated. Given that a digital compressor can't protect you from clipping the A-D converter, and that most DAWs have more sophisticated dynamics built in, I can't see why you'd ever really want to use these.

What, then, of the Studio Capture's Auto-Sens technology? The idea is roughly as follows: you plug a microphone in, point it at a musician, hit the Auto button and have them play the loudest part of their performance. After a few seconds, the Studio Capture analyses what it's just heard and sets the input gain appropriately. In practice, this works well. It's clever enough to realise that gain for stereo-linked channels should be set identically even if the channels receive different input levels, and that it shouldn't ramp the gain up to the maximum +58dB if no signal is detected. By default, Auto-Sens sets the input gain so as to leave only 6dB headroom before clipping, which would be little enough to make me uneasy in many circumstances. However, this can be switched to a more conservative 12dB (or a living-on-the-edge 0dB!) if you prefer, and you can of course make manual gain adjustments after Auto-Sens has done its work, or, indeed, set the level yourself.

The Studio Capture software's monitor mixer page. The other page of the control panel provides either a single monitor mixer, for situations in which flexibility takes second place to simplicity, or four separate ones labelled 'A' to 'D'. A small floating Patchbay window lets you choose what is heard at each of the five output pairs (the headphone bus is treated as an additional pair), so you could, for instance, have the first two output pairs and the headphones sharing monitor mix A, while outputs 5/6 hear monitor mix B and outputs 7/8 directly pick up an output pair from software such as a click track. A simple built-in reverb is available in monitor mix 'A' only, in case your performer wishes to hear it in his or her phones. Two pairs of faders at the far right of the monitor mixer set the overall balance between directly monitored inputs and DAW returns. The first of these has its own front-panel control beneath the Studio Capture's display.

The Studio Capture supports sample rates up to 192kHz, but, oddly, multiples of 44.1 are not available, so the full list comprises 44.1, 48, 96 and 192 kHz. At the highest of these, you lose half of the inputs and outputs, but full functionality is retained at 96kHz.

Roland's promotional material for the Studio Capture makes considerable play of its 'High-performance VS Streaming driver technology” and 'industry-leading low-latency USB performance”. However, when I tested real-world latency using Oblique Audio's RTL Utility, the figures I obtained were surprisingly poor: with the buffer size set to 256 samples, for instance, the actual round-trip latency measured a whopping 1278 samples (29ms) at 44.1kHz.

After this review appeared in the print edition of Sound On Sound, though, Roland supplied a second unit for testing, and under their direction, I was able to achieve considerably better results. It transpires that the driver is set up by default for optimum performance in WDM mode, as used by Cakewalk's Sonar, and that ticking the small box labelled 'Reduce CPU Load' not only reduces CPU load but also brings down the ASIO latency quite a bit. This is not mentioned anywhere in the documentation, and runs counter to the similar-looking features in other interface drivers I've encountered, where such options invariably reduce CPU load by introducing additional safety buffers and thus increasing latency.

With this box ticked, my RTL measurements were broadly in line with other USB interfaces I've tested, and unlike many, the Studio Capture was happy to function in my system at its lowest 32-sample buffer size, with the round-trip latency measuring 5.2ms at 44.1kHz. Roland tell me that they will be improving their documentation, and that future versions of the driver will be optimised by default for best performance under ASIO rather than WDM. In short, then, it is possible to set the Studio Capture up for genuine low-latency operation, increasing its appeal to those who like to play soft synths or guitar amp simulators live.

The Studio Capture also has a great deal to recommend it for those whose main need is recording lots of acoustic sources simultaneously. Eight mic preamps often isn't quite enough, and in common recording situations, such as when you're close-miking a drum kit and trying to record a guide vocal and guitar part simultaneously, the extra four preamps will make all the difference. With four dedicated line inputs on offer as well, I personally don't miss the provision of ADAT digital expansion, and indeed, the ability to sync two Studio Captures together gives you sufficient expandability to tackle all but the largest recording sessions. Its compactness, coupled with its better-than-average metering, makes it a particularly appealing choice for location recording work. And whereas many interfaces in this sort of price range offer fiddly and non-linear analogue gain controls, the Studio Capture's digital controls let you match channel gains precisely for stereo recording, and recall them perfectly for overdubs or future sessions. The Studio Capture is a really classy piece of kit, with plenty of nice touches in the design department that lift it above the herd. 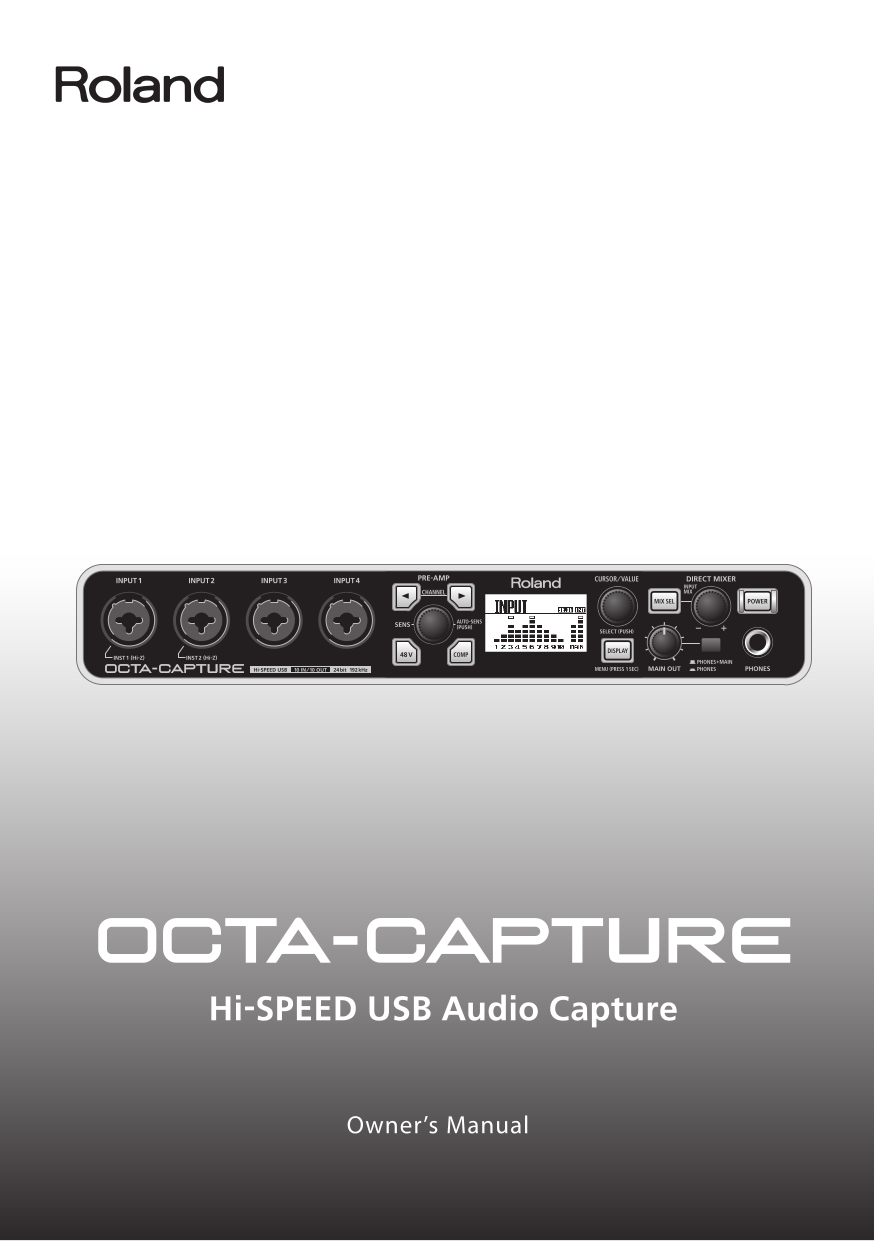 Roland's Studio Capture builds a lot of I/O into a small and surprisingly powerful package, with the advantage of full digital control and recall of almost every parameter.